In Search of the Silver Lining

Summer has arrived, but the mood in the air is still somewhat gloomy. The announcement that SA is now in a technical recession was not entirely unexpected. It has been evident in lower company earnings and economic data for a while, and the post-Ramaphoria reality has been reflected in financial markets this year.

Unfortunately, we’ve been caught in a perfect storm – apart from our own problems, the freefall in the Turkish Lira and an emerging market sell-off precipitated by rising US interest rates and a mounting trade war certainly haven’t helped.

There are some glimmers of hope, however. Nene’s replacement by Tito Mboweni was a good political move and sends a positive message that Ramaphosa is firm on any links to corruption. Business and labour alike lauded his appointment, reassured by his reputation as former Reserve Bank governor and his good standing in the financial and labour sectors.

Moodys, the most positive of the ratings agencies, reduced our growth forecasts, but fortunately postponed any decision on a possible downgrade. If Tito can show that the right initiatives are being put in place to address spending and stimulate growth, we may even see an upgrading in the future. Ramaphosa has shown his commitment to his stimulus package and his ambitious plan to rescue the ailing economy, although the impact is unlikely to be felt immediately.

The JSE has really struggled this year. In fact, it has done so for the better part of three years. This is not just due to the weak economy, but also as some of the large global shares listed on the JSE have struggled for company or industry-specific reasons. For the year to date, the JSE on 22 October is down 12.2%. Naspers, which comprises one-fifth of the index, is down 21.7%. Against the dollar, the Rand has depreciated by 15% so far this year. So we’ve had a double whammy of an emerging market sell-off and a weak Rand. We can see this quite clearly in the graph below, which also shows just how exceptional global equity market returns have been. 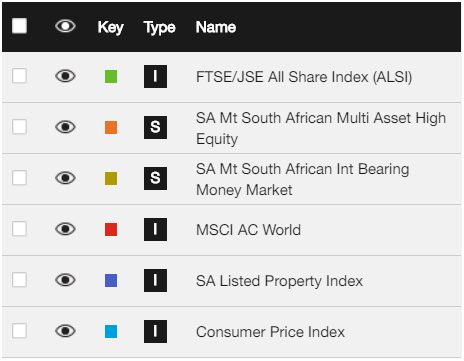 On a five year view, returns at least exceed inflation, but are still less than half those (in Rand terms) of global markets, illustrating the importance of a diversified portfolio.

Investors understandably get tired of being told to “be patient” and “invest for the long term” when returns have been disappointing for a while now, but it is very important to keep three things in mind: One, the flip side of disappointing recent returns is that valuations and therefore prospective returns have improved. Secondly, being appropriately diversified remains the best defence against negative surprises. Lastly, while the economy has contracted, there has been substantial growth in scary headlines and depressing commentary. Don’t get carried away and make emotional investment decisions such as selling out of long-term investments or a knee-jerk switch out of equities into cash.

When looking at emerging market concerns, we need to remember that although South Africa has problems, we are not nearly in the same boat as Turkey and Argentina. The Rand, however, is one of the most highly traded currencies among emerging markets and is therefore exposed to the shifts in sentiment of global investors. The weaker rand has contributed to another sizable petrol price increase which in turn places more pressure on consumers. On the plus side, a weaker rand does increase the value of the global portion of your portfolio, just as it boosts the revenues of exporters.

Clearly we need to be concerned about the persistent weakness in the economy. Fortunately, as investors, we have the benefit of being able to spread risk beyond South Africa’s borders, and up to 30% of traditional balanced funds may now be invested in offshore assets. But of the remaining 70%, there is a sizable portion that is not directly linked to local economic growth (or the lack of it): many of the largest companies on the JSE are global players with little exposure to the domestic economy, while cash and bond returns are linked to the interest rate cycle, not economic activity. And with a conservative Reserve Bank keeping a hawkish eye on inflation, interest rates are attractively high from an investors point of view (which of course is the not the same as a borrowers’).

Remember that we’ve been here before: political uncertainty, a struggling economy and tough market conditions have happened more frequently in the past than we care to remember. We’ll get through it this time too.