Why is Populism on the rise?

It has been a daunting few weeks in South Africa. The push for land expropriation without compensation and nationalisation of the Reserve Bank seems to be bringing an end to the Ramaphosa honeymoon. It seems the Economic Freedom Fighters are driving the policy agenda, suggesting that populism is coming to the fore. It feels scary, as if we as a country are isolated. But are we? The rise of populism seems to be a global phenomenon, particularly in the Western world. Why is this happening?

We came across this fascinating graph from the asset manager Sarasin in London. It may start to give more pointers as to why populism has been surging in the past four years or so.

The vast majority of people in the world have not been doing well since 1980. The middle class have suffered the most, and only a few very wealthy people have truly benefited. Access to more debt through the invention of access bonds in the Clinton era, probably relieved the pressure for a long period, but the debt crisis and market crash of 2008 ended that party for many. Since then we have seen voters around the world trying to change their countries’ political order. 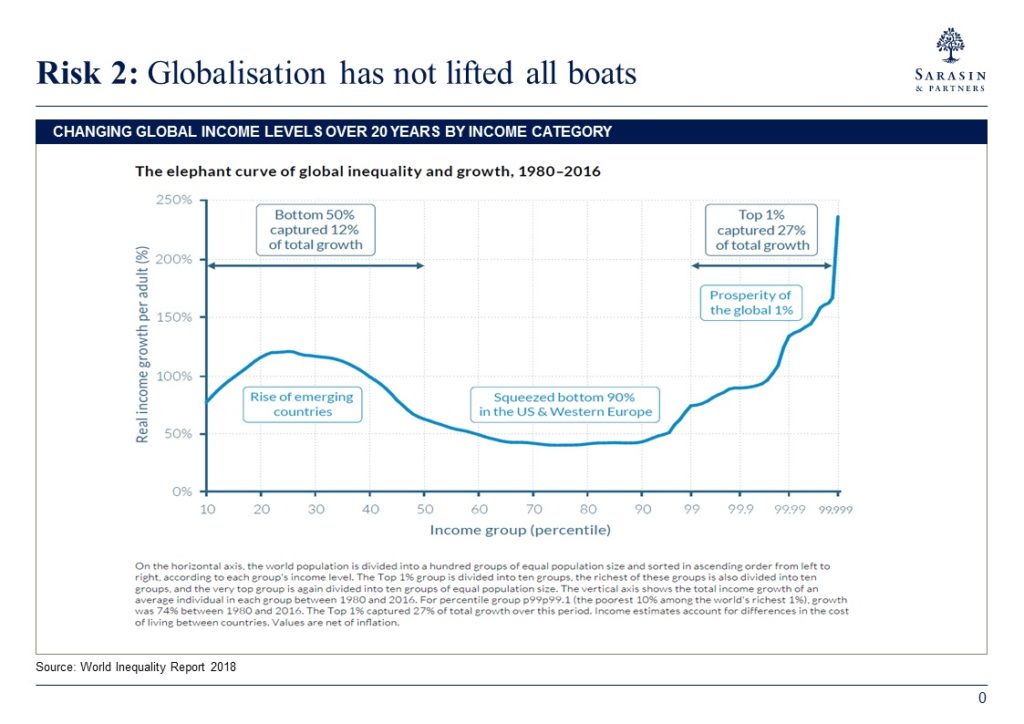 The graph shows on the horizontal axis that the world population is divided into 100 groups of equal population size, sorted in ascending order from left (Poor) to right (Wealthy), according to each group’s income levels. The Top 1% on the right-hand side is divided into 10 groups to look closely at how the last 1% has done between 1980-2016. The graph shows that for the poorest people in the world (the bottom 35%) incomes have improved. Once you go past the poorest 35% the quality of people’s lives has been declining for 36 years. The top 1% received 27% of the income benefit on offer over that period.

So, you might be saying, the rich get richer? The problem is that the middle class are frustrated and now angry, and no longer believe the political spin which they have been given. They want change, but as you have seen with Brexit and Italy recently, the response can be incoherent and dangerous. Trump, who is an unsavoury and potentially dangerous character, is benefiting from this. He is tapping into this anger, and to get re-elected he knows he needs money to go back into the hands of the working and middle class in America. Protectionism, tariffs, new jobs and lower taxes are music to the middle class.

The graph above shows exactly what people have been feeling, and the political class and most media houses seem still blissfully unaware. As a result, you have seen voting patterns change dramatically where voters no longer vote for the established political class but are voting in protest against them, even to the voters’ own detriment. It seems ‘Anything but You’ is the mantra with which people enter polling booths. A great deal of anger and frustration has been shown up in the results. This has manifested itself particularly among the middle and working classes which, for example, form the core support for Trump in the US, Brexit in the UK and French president Macron, who went as far as establishing a new party in order to appeal to voters disillusioned by establishment political movements. With the rise of extreme politics, the voice of the liberal, it seems, is laughable to the electorate.

To make matters worse: in the graph, the top 1%, has been broken down into smaller and smaller numbers to show how the wealthy have continued to thrive, and this has added to the masses’ frustration. Who said it …. “comparison is the thief of joy!” It seems the globalisation party is over for now.

The media trashes Trump’s ‘America First’ rhetoric, but he has the pulse of the voting public. How they relate to this billionaire isn’t always understood by those further afar, but he is doing what they want him to do. We enter a world where the voting public ask for a strong-man leader. Xi, Trump, Putin, Turkish, North Korea leaders … none of whom will earn points for world peace, but they in their own styles seem to give the sense to their public that they are listening and fighting for their cause. They embolden them further.

In South Africa, commentators lament the fact that Ramaphosa has not acted swiftly. Pundits forget that he has a slender majority in the ANC, which can easily be overturned. As we saw in the recent FIFA world cup, Ramaphosa as a defender of democracy and good governance, needs to be careful of the Neymar players who, when you go near them, throw themselves to the ground and act like the victim or, in politics, martyrs.

A strong ANC showing in the April 2019 election will strengthen Ramaphosa’s hand no-end. A likely static EFF vote and a declining DA vote will allow him to act more decisively, always keeping in mind the next ANC elective conference in less than four years from now.