“A little learning is a dangerous thing …”

We recently came across an interesting explanation that goes a long way towards demystifying investor behaviour in times of uncertainty.

Called the Dunning-Kruger effect, it’s essentially the cognitive bias of illusory superiority that comes from our inability to recognise our lack of ability.

Bertrand Russell summed it up beautifully almost 100 years ago: “The fundamental cause of the trouble is that in the modern world the stupid are cocksure while the intelligent are full of doubt.” 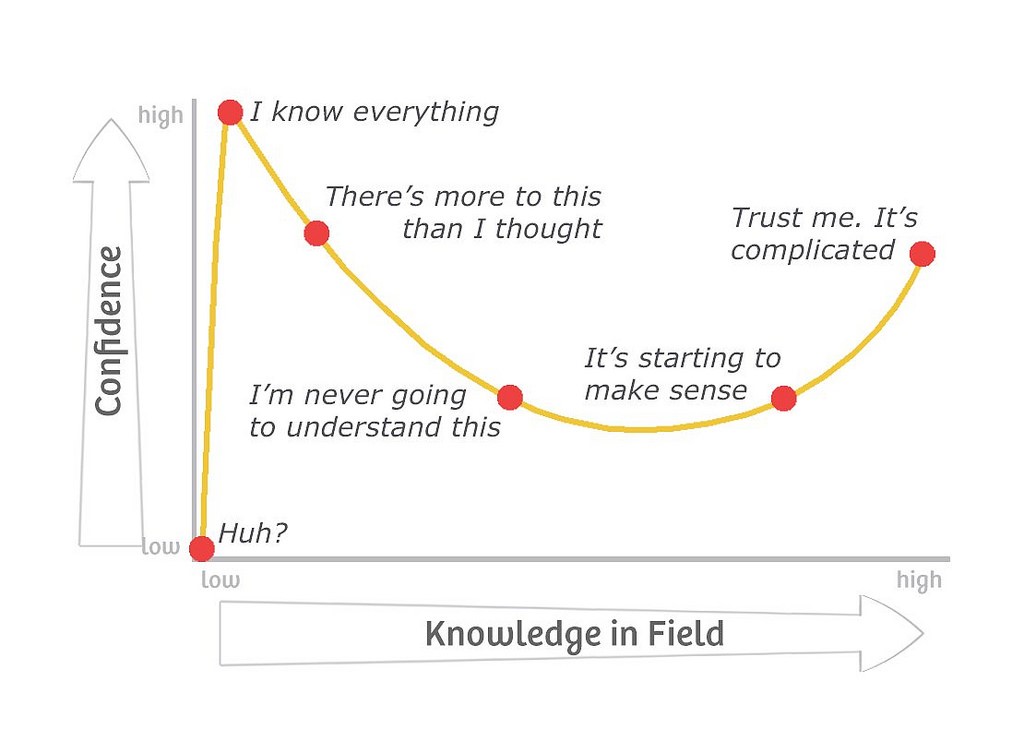 The psychological phenomenon of illusory superiority was identified in Kruger and Dunning’s 1999 study “Unskilled and Unaware of It: How Difficulties in Recognizing One’s Own Incompetence Lead to Inflated Self-Assessments”. A classic example of this phenomenon was evident in the criminal case of McArthur Wheeler, who robbed banks with his face covered with lemon juice, which he believed would make it invisible to the surveillance cameras. This belief was based on his misunderstanding of the chemical properties of lemon juice as an invisible ink.

This example can easily be related to an aspiring investor who, armed with Google, a few biased media opinions, and some of those legendary conversations round the braai, believes that they have worked out how to make easy money.

Overconfidence, as the graph above shows, tends to bring with it a rather uncomfortable reality.

In their book Self-insight: Roadblocks and Detours on the Path to Knowing Thyself (2005), Dunning described the Dunning–Kruger effect as “the anosognosia of everyday life”, referring to a neurological condition in which a person either denies or seems unaware of a disability. He stated: “If you’re incompetent, you can’t know you’re incompetent … The skills you need to produce a right answer are exactly the skills you need to recognise what a right answer is.”

Interestingly, cultural forces could also have a role in the occurrence of the DK effect. Studies of Japanese people have indicated that they tend to underestimate their abilities, and tend to see failure as an opportunity to improve their abilities at a given task. This, in turn, increases their value to their social group.

In satirical recognition of their scientific work, Kruger and Dunning were awarded an Ig Nobel Prize in 2000. The Ig Nobel Prize is a parody of the Nobel prize that is awarded to “honour achievements that first make people laugh, and then make them think”.

All this serves as a good reminder to all investors to be wary of overconfidence, which can lead to poor investment decisions. Hindsight would have been a wonderful gift during the last four years, and even more so this year. Yet, looking at market flows, there is an alarming trend of investors switching out of growth investments into cash, just at the point when our equity market is offering more value than it has done for years.

Although the Dunning–Kruger effect was formulated in 1999, the cognitive bias of illusory superiority has been known throughout history and identified by intellectuals, such as the philosopher Socrates, poet Alexander Pope and naturalist Charles Darwin.

Concluding with a line from playwright William Shakespear’s As you like it, “The fool doth think he is wise, but the wise man knows himself to be a fool.”