The defeat by Steffi Graf in the Wimbledon final of 1993 has been described in several obituaries as the defining moment in the life of Jana Novotna. I couldn’t disagree more strenuously. It may be the most famous moment but Novotna is not defined by that final but by what happened afterwards; how this remarkable woman recovered from one of the most vivid chokes in sporting history.

Allow me to start by comparing and contrasting two other sportsmen who suffered dramatic meltdowns. Jimmy White was a scintillatingly talented snooker player, but even his admirers would concede that fissures often opened up in his technique as the pressure mounted, not least in the 1994 World Championship final when he missed a black off the spot in the deciding frame. In all, White lost six world finals.

I chatted to White a few years later, when he was still in with a chance of winning an elusive title. I was curious as to what he had learnt about his defeats and whether he had developed strategies to cope with pressure. He was dismissive. “You can’t teach the mind stuff,” he said. “You just get into a decent position and trust to luck.” Have you ever watched a tape of that 1994 defeat, to see if you might learn from what went wrong? “I never have, and I never will,” he replied.

Rory McIlroy had a rather different response to the catastrophe that he suffered at the 2011 Masters. Leading the competition on the 10th tee of the final round, he skewed his drive and proceeded to implode, dropping six shots over three holes. Many pundits wondered if the emotional scar tissue would ever heal. “Once a choker, always a choker,” it was said.

But McIlroy, unlike White, didn’t bury his head in the sand. The next day, he asked a friend to send a tape of the fateful round. “It was all about turning disappointment into motivation,” he said. “I went home and analysed it . . . I realised that I was way too focused. I was thinking about the round overnight, during the morning; nothing else was on my mind. I was thinking about what could go right, but also about what could go wrong. That is no mental state in which to perform.”

Two months later, he had the chance to adopt a new strategy when leading the US Open by eight shots going into the final round. “I learnt to switch off between shots,” he said. “I talk to my caddie [at that point JP Fitzgerald] about a movie that I saw the night before, or a football match. Sometimes, I will tell JP to talk to me about a film, a match, anything to stop me focusing too hard. Only as I approach the ball do I switch back on. This means there isn’t enough time to think about what might go wrong, for negative thoughts, or for doubts to creep into your mind.” McIlroy won with a tournament record low score of 268.

The McIlroy example hints at a profound psychological truth. Namely, that a prerequisite for improving at a given skill, whether performing under pressure or anything else, is the prior belief that the skill is amenable to self-improvement. Such an attitude motivates one to practise, to reflect and, therefore, to grow. It was this belief that gave McIlroy the self-efficacy that White, who didn’t believe performing under pressure was capable of improvement, lacked. 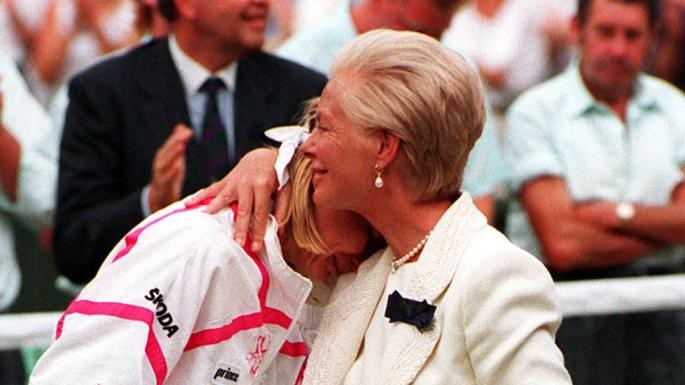 The Duchess of Kent comforts a sobbing Novotna in 1993

And this brings me back to Novotna. In four decades of watching sport, I am not sure that I have witnessed a more poignant meltdown. The double fault at 40-30 when leading 4-1 in the final set. The overhead into the net at game point to Graf. The strangely sluggish motion, as though her body were no longer under her executive control. Like so many others, I cried when she bowed her head into the shoulder of the Duchess of Kent. There but for the grace of God . . . and all that.

But this moment was not the end for Novotna; it was a new beginning. One of the many joys of covering Wimbledon is the opportunity to chat to former players as they walk the grounds, or over at the practice courts. A couple of years ago, I introduced myself to Novotna and she was generous with her time, and fascinating in her responses.

“The tag of choker followed me around for a long time,” she said (one newspaper called her No-No Novotna from Choke-Oslovakia). “Even when I won, people would still keep talking about the defeat at Wimbledon. There was a feeling that no matter how well I did in smaller competitions, I would fall apart again at the grand-slams. That was an incredibly difficult label to carry around my neck.”

But she was not deterred. The day after the final, she didn’t bury her head, but read the newspapers, taking consolation from the outpouring of warmth. A little later, she watched the tape of the match. Although she publicly claimed that she had not choked but had merely executed a poor game plan, she was inwardly learning the lessons.

“I came to realise that ‘choker’ was a label imposed on me,” she said. “But I didn’t need to accept it. I could do something about it. That made a huge difference to the way I thought about the future.”

The journey wasn’t always easy. She endured a gruesome defeat by Chanda Rubin, a 19-year-old American, in the third round at the 1995 French Open and lost an absorbing Wimbledon final to Martina Hingis in 1997, but she was constantly honing her mental game and preparation. She arrived in Britain two weeks before the 1998 Wimbledon Championships, winning the singles and doubles at Eastbourne before defeating Venus Williams in the quarter-finals at SW19 to open up the draw. When she faced Nathalie Tauziat, of France, she was ready for the final step towards immortality.

“Even now, I find it difficult to remember what happened on that final point [it was an immaculately delivered forehand winner down the line],” she said. “The emotions were more intense because of what had happened five years earlier. That is why losing to Steffi was one of the most valuable days of my life. I learnt about myself and about life. We all fail in this world, whether we play sport or not. The real question is, ‘How do you deal with it?’ ”

Her words struck me at the time, but they strike me even more forcibly now that she has gone. Life is too short to be derailed by failure, or to be so fearful of making a fool of ourselves that we don’t even try.

Novotna suffered a meltdown more public than most, but never lost her courage. She took that attitude into life after tennis, too, becoming a fine coach, commentator and friend. When Martina Navratilova had her own battles with cancer, Novotna drove her to hospital.

It is natural to feel sadness at the premature passing of such a fine champion, but my dominant emotion is one of gratitude. Gratitude for the example she set, and the graciousness she revealed in both victory and defeat. Her life may have been short, but it was beautifully and authentically lived. As the poet Ben Jonson put it: “In small proportions we just beauties see; And in short measures, life may perfect be.”