Bitcoin and that FOMO Feeling

We have a joke in our house about FOMO, or the Fear of Missing Out. Invites to a social engagement when you have already accepted another invitation can bring on a bout of FOMO, which in turn can cause some very raw feelings of stress and envy. Of course, nothing raises emotions more than money, and it has been amazing to watch what has happened to Bitcoin in the last year.

Sir Isaac Newton, Britain’s most celebrated mathematician and physicist, formulated the laws of motion and universal gravitation and developed calculus, making him arguably one of the smartest people who ever lived.

In 1720, Sir Isaac bought shares in the South Sea Company, which was the hottest stock in the UK at the time. The company had a monopoly on trade in the South Seas in exchange for taking over England’s war debt. This appealed to investors and the share price rose steadily, at which point Newton sold his relatively small stake for a handsome profit. It should have ended there.

The share continued to escalate and Newton watched as his friends just kept getting richer. He eventually capitulated and, in true FOMO style, he used almost all his life savings to buy shares at more than three times the price of his original stake. He lost it all in the subsequent rout, prompting him to allegedly comment that “I can calculate the movement of stars, but not the madness of men”.

Unfortunately, being smart isn’t always enough. Newton let his emotions get the better of him and he got sucked into the crowd mentality. In too many cases, the investor’s biggest problem, and often his or her worst enemy, is him or herself.

Newton was not the first and will certainly not be the last, person to be consumed by FOMO. Bubbles continually emerge in capitalism from Tulips, South Seas Company, Japanese shares, Tech Bubbles and now it seems potentially Bitcoins.

A number of old adages come to mind when considering Bitcoin in particular:

Nobel prizes for economics have been awarded for research on investor behaviour in an attempt to understand this ‘madness of men’. The idea is to learn from the mistakes we have made, and then to recognise when emotions are driving our investment behaviour or fundamental investment reasons for investing.

Below is a graph that shows what Isaac Newton went through. He bought in early with the smart money and sold for a healthy profit to the institutions. Then you will notice the media attention phase kicks in and the general public get involved. This final period is called Mania by many behavioural scientists. Out of interest, we at Veritas were never asked about Bitcoin until three months ago, whereas we now receive at least one query from clients daily. 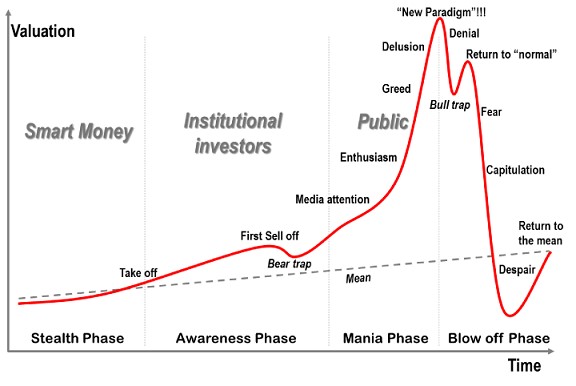 Below is a graph of Bitcoin’s price since 2009 to June 2017 which shows a striking resemblance to the above graph. 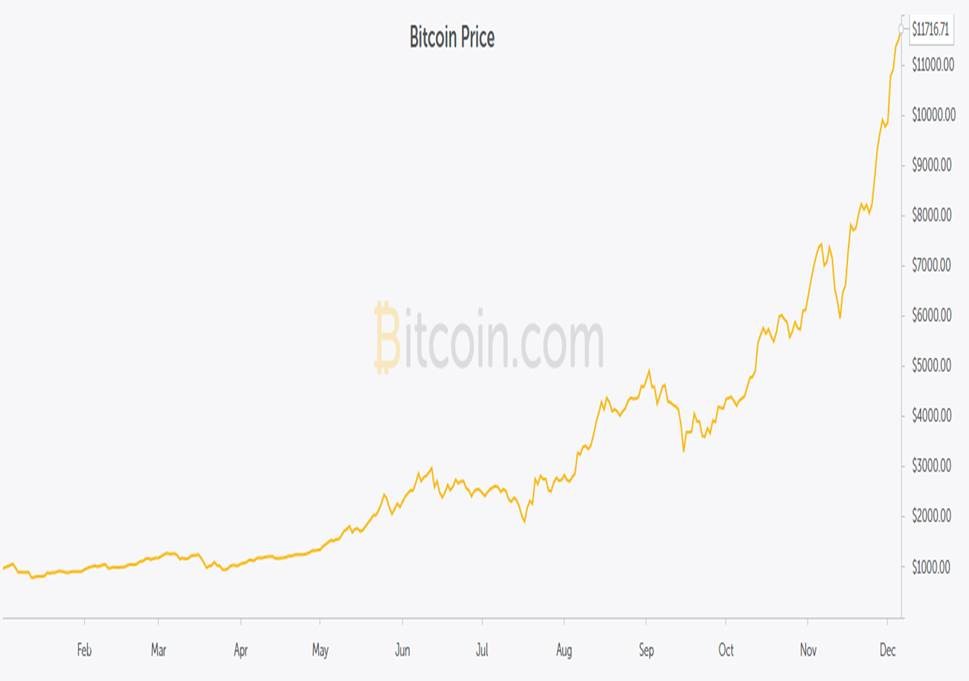 From reading the media, it seems that Bitcoin is the only cryptocurrency, but if you do a bit of research it is competing with 1 100 other cryptocurrencies. It has only been around since 2009. It apparently uses enough electricity to power 1,6 million US households, so it is not environmentally friendly and it is relatively small. Only 21 million Bitcoins will ever be produced. They reckon if Bitcoin were one day to replace the global monetary system it would need several trillion. And having now breached the $13,000 mark for the first time, Bitcoin’s market capitalisation exceeds that of New Zealand’s Gross Domestic Product.

There is no doubt that Bitcoin’s underlying technology is the real game changer. Much the same as electricity, telephones, internet, cell phones and GPS, this technology could change the way business is done in the future. This is probably the real long-term story.

For those of you who have owned Bitcoin for the last year or six months, congratulations. Enjoy your success but consider a tactic that gamblers use at the casino: Set yourself a benchmark and then pull money off the table when you reach the mark; you can stay in the game with the remaining money.

The message in this is that we need to remember that we are investors, not speculators. And when tempted to be driven by sentiment, the words of Sir John Templeton ring true: “To buy when others are despondently selling and sell when others are greedily buying requires the greatest fortitude and pays the greatest reward”.